It was an evening of reliving great memories, fraternizing, giving back and all round merry making when the University of Jos Alumni Association (UJAA) hosted a Mega Reunion and Dinner at the Shehu Musa Yar’adua Centre in Abuja. The event, which was held in conjunction with the University’s Directorate of Alumni Relations, witnessed a large turnout of dignitaries who are Alumni of the University from within and outside the Country including political bigwigs, captains of industry, technocrats, entertainers and celebrities, who all turned out in support of the infrastructural development of their alma mater.

Speaking during the occasion, Speaker of the House of Representatives, Rt. Hon. Yakubu Dogara said a University is only as great as the quality of graduates that it has produced. Speaker Dogara noted that any University aspiring to the status of being world class must cultivate a robust relationship with its Alumni. While commending the organizers of the event, Dogara, who was accompanied by several members of the House of Representatives who are also Josites, assured that they would always support the University in any way they can.

On his part, the Minister of Sports and Youth Development, Barrister Solomon Dalung, himself a Distinguished Unijos Alumnus, called for concerted efforts among Josites who should leverage on the University’s goodwill in attracting more development projects for its sustainable growth. The Minister said the University had contributed a lot to the development of Nigeria’s human resources and therefore, should also be supported in its next phase of growth and development.

Vice-Chancellor of the University of Jos, Professor Seddi Sebastian Maimako expressed delight that prominent Alumni of the University had converged for the purpose of contributing their quota to the advancement of their alma mater. Professor Maimako explained that the Federal Government had already directed its Universities to tap from their Alumni resources to complement Government’s efforts in improving their infrastructure. The Vice-Chancellor therefore appreciated the Unijos Alumni Association for being proactive in the activities undertaken towards assisting the institution.

President of the University of Jos Alumni Association (UJAA), Alhaji Idris Yakubu disclosed that the event was organized to provide members the opportunity to reunite, interact and bond together. Alhaji Idris said it was also a platform to honour some illustrious members of the Association and unveil the Association’s flagship project, the Unijos Alumni Centre which is a multi-purpose building project comprising of a 500 seater Auditorium, Banquet Hall, Seminar Rooms, Shops and Internet Arcade among other facilities. He noted that it was a commercially viable project and appealed to all members to donate towards its establishment.

Highpoint of the occasion was the presentation of merit awards to fifty (50) Josites who have distinguished themselves in their various areas of endeavour including the Speaker, House of Representatives, Hon. Yakubu Dogara, Plateau State Governor, Simon Lalong, his Deputy, Sonni Tyoden, Governors of Imo, Kebbi and Bauchi States, Deputy Governors of Nasarawa and Ebonyi States, Ministers of Youth and Sports, Niger Delta Affairs, members of the National Assembly, Vice-Chancellor of the University of Jos, Professor Seddi Sebastian Maimako and other Vice-Chancellors as well as Heads of Government Establishments and private organizations. 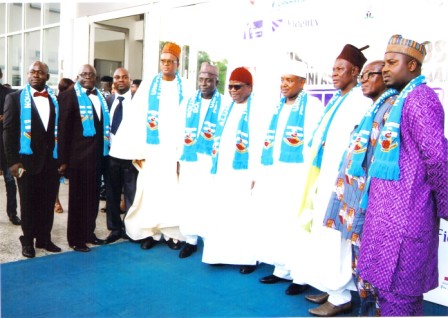