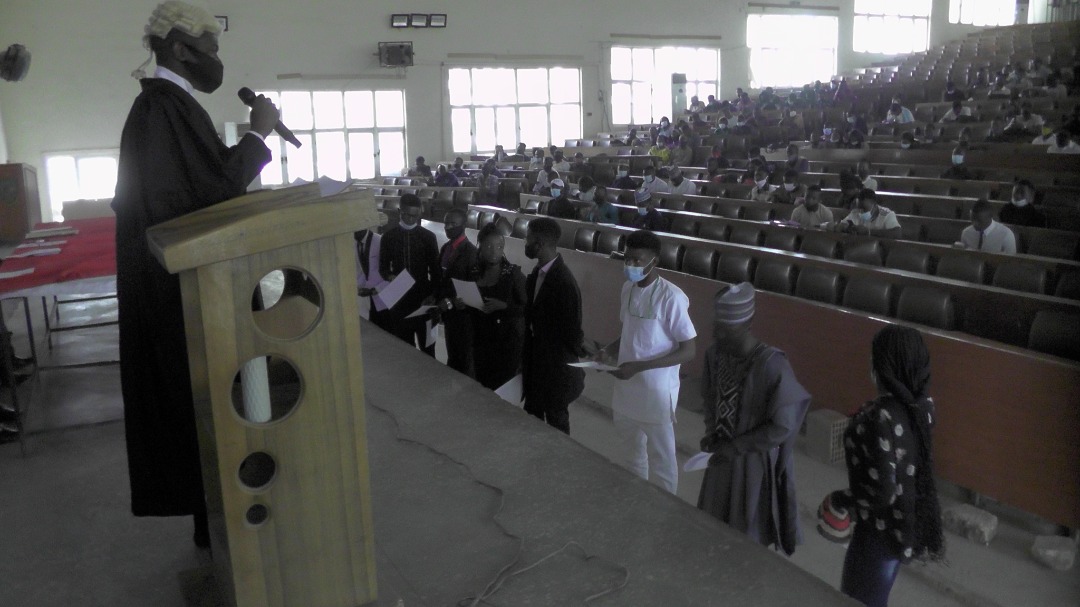 Officials of the Students Union Government (SUG), University of Jos say they will create programmes that will improve the capacity of Students to be more resourceful and contribute to the University Community’s general wellbeing.

Newly elected President of the SUG, Comrade Danladi Joshua stated this after taking his oath of office during the inauguration and oath taking ceremony of the new EXCO held at the Multipurpose Auditorium, Bauchi Road Campus.

According to the President, just as the University of Jos is undergoing a wholistic revival under the leadership of the Vice Chancellor, Professor Seddi Sebastian Maimako, he was optimistic that under his administration, the Students body will experience a resurgence that would transform the University in line with its vision and mission.

Comrade Danladi expressed his readiness to learn from the mistakes of previous Student leaderships and complete any unfinished projects left behind by his predecessors. While calling on his team to unite for the progress of Students of the University, the SUG President appreciated the University Management and the Directorate of Students Affairs which supervised their elections for conducting a free, fair and credible election that led to their emergence.

Administering the oath of allegiance, the Oath Commissioner, Barr. Maurice Alkali charged the President and his EXCO to be faithful and bear true allegiance while discharging their duties according to the Constitution of the union. He urged them not to use their office for personal gains but in the interest of those who elected them.

In his remarks, Vice-Chancellor, University of Jos, Professor Seddi Sebastian Maimako represented by the Deputy Vice-Chancellor (Academic), Professor Tanko Ishaya expressed confidence in the ability of the new SUG EXCO to deliver on their mandate and believes that their emergence will create more avenues for addressing Students challenges on campus.

He challenged the new EXCO to emulate the leadership style of the outgone EXCO, which closely collaborated with the University Management to ensure that peace reigned on campus.

Professor Maimako said, what weakens any leadership is lack of communication and failure to adhere to positive advice from its followers, hence the need for the Students Union leaders to always listen to their members and other stakeholders who make positive suggestions that could lead to the progress of the Union and the University at large.

Earlier in an opening remark, Dean of Students Affairs, Dr. Filibus Dami expressed delight that despite the challenges of COVID 19, the Directorate in collaboration with the Students body was able to overcome the difficulties and make the event successful. He advised the new EXCO to render what he called true representation to the Students rather than indulging in the pursuit of personal interest.

Also speaking, the outgone President, Comrade David Peters appreciated the University Management and the SUG members for affording him and his team the opportunity to serve in their various capacities. He congratulated members of the new EXCO and wished them a successful tenure.