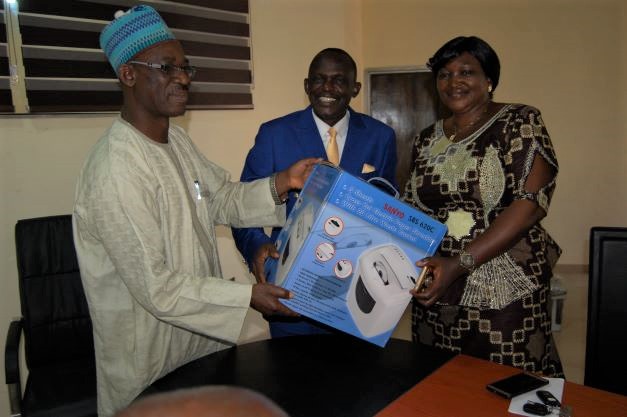 Danjem was speaking when he received a donation from a Staff of the University, Mr Amos Mallo who recently completed his five-year term as Registrar at the Plateau State University (PLASU), Bokkos and has returned back to the institution after his tour of duty.

The presentation which had in attendance all Heads of Units in the Registry Department and a representative of the Association of Nigerian University Professional Administrators (ANUPA), University of Jos Branch, was held at the Registrar's Board Room, Senate/Administrative Building, Naraguta Campus.

Receiving the office equipment which included Two units of a three-in-one Photocopier (Photocopier, Printer and Scanner), one Spiral Binding Machine, Paper Shredder and a Giant Stapler, Chief Danjem appreciated the kind gesture of the donor. The Registrar commended Mr Mallo for seeing the need to give back to the system that groomed him noting that the donation will go a long way in contributing to the running of the Registry Department and the University at large.

Danjem who promised that the items received will be judiciously used said the University is proud of Mr. Amos Mallo's contribution to the development of PLASU and the successful completion of his tenure which the Registrar acknowledged was due largely to the support Mr Mallo enjoyed from the Staff at PLASU.

The Donor and immediate-past PLASU Registrar, Mr. Amos Mallo described the items presented as a token of his appreciation to the University of Jos for giving him the opportunity to serve in that capacity and expressed hope that the items donated will be helpful in the discharge of administrative activities in the Registry Department.

A Staff of the Plateau State University (PLASU), Bokkos, Felicia Pwajok, who attended the occasion, thanked the University of Jos for allowing Mr. Mallo to contribute his quota to the progress of PLASU, saying he demonstrated a high sense of responsibility and professionalism while in office.