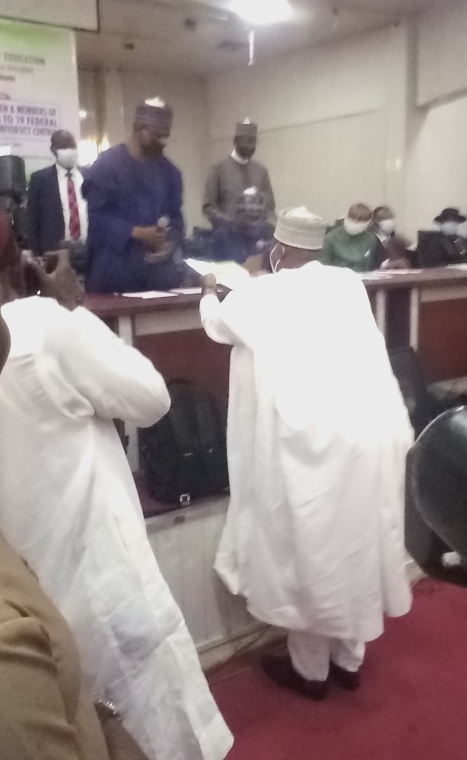 Minister of Education, Mallam Adamu Adamu stated this while inaugurating the Governing Councils of 19 Federal Universities and 4 Inter-University Centres at the National Universities Commission Headquarters in Abuja on behalf of President Muhammadu Buhari.

Mallam Adamu enjoined the new Governing Council members to familiarize themselves with the Laws governing the establishment and running of Universities so that they can perform their functions effectively by providing the governance oversight necessary for the system to thrive.

The Minister said the selection of the members was done meticulously especially the Pro-Chancellors and Chairmen of Councils, many of whom he described as highly experienced technocrats who have excelled in their chosen careers. He noted that although several of them needed to be vigorously persuaded before they accepted the appointments, he was confident that they would give added impetus to the governance process of the various institutions and thanked President Buhari for giving expedited approval for the Councils’ reconstitution.

Speaking earlier, Executive Secretary of the National Universities Commission (NUC), Professor Abubakar Rasheed described Nigerian Universities as the last frontier of knowledge which play critical roles in the development of the country’s socio-economic and public sectors.

Professor Rasheed explained that the new Governing Councils are expected to spearhead the reputational management and act as a moral compass for the institutions. According to him, following the conclusion of the assignment of the Visitation Panels to the various Federal Universities, the Federal Government will publish White Paper Reports that will guide the Managements and Governing Councils on ways to improve their Universities’ fortunes for the better.

The Executive Secretary revealed that the NUC had set up a Committee headed by one of his predecessors, Professor Peter Okebukola to review the curricular of the various Universities towards strengthening the pedagogical and entrepreneurship skills of the Students.

Responding on behalf of his colleagues, former Minister of Budget and National Planning, Sen. Udoma Udo Udoma who is now the Pro-Chancellor and Chairman of Council, Bayero University, Kano, appreciated President Muhammadu Buhari for giving them the opportunity to serve the nation in their present capacity. Sen. Udoma who described Education as the foundational bedrock for which societies are built, assured that they would justify the confidence reposed in them by improving the quality of Education provided by Nigerian Universities.

Among the new Governing Councils inaugurated was that of the University of Jos headed by former INEC National Chairman, Professor Attahiru Jega as Pro-Chancellor and Chairman of Council. Other members of the Council are Sen. Ahmed Baba Zuruq, Professor Anthony Christopher Okpe, Chief Paingha McDonald and Chief Abdulmajid Uzamot.

Acting Vice-Chancellor and Deputy Vice-Chancellor (Administration), Professor Gray Goziem Ejikeme led other Principal Officers of the University of Jos to attend the inauguration.